Three Things to know about the 2020 Coup in Mali 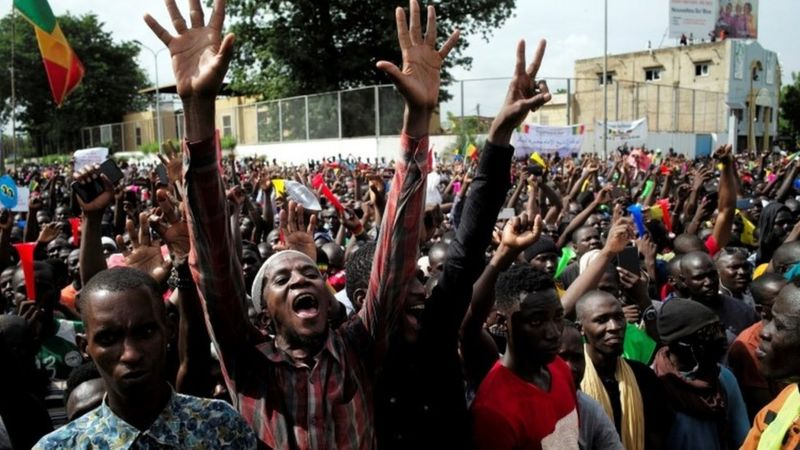 There was a recent coup in Mali

The Coup took place on the 18th of August 2020 in the West African nation of Mali. It began in the garrison town of Kati, near Bamako, Mali’s capital, when a conflict between rebel soldiers and army loyalists escalated and resulted in the arrest of senior government officials, like Boubou Cissé, the country’s Prime Minister. By the evening, the rebel soldiers arrested President Ibrahim Boubacar Keïta, who announced his resignation in a televised statement at midnight, reportedly from a room in the Kati army base. Additionally, Keïta announced that, as a consequence of his departure, the national assembly and the government would be dissolved. Unsurprisingly, the coup was celebrated with joy throughout the country, especially in Bamako, coming as it did after six months of continuous protests against Keïta’s regime. Since June, the alliance between opposition politicians and a coalition of civil society actors known as the M5-RFP (June 5 Movement – Rally of Patriotic Forces), has organized massive demonstrations under the leadership of Mahmoud Dicko. The protestors had one central demand: Keïta’s resignation. Nevertheless, the Economic Community of West African States (the ECOWAS) has mediated negotiations between Keïta’s government and the M5-RFP since July, with the efforts of the presidents of Ghana, Ivory Coast, Niger, Nigeria and Senegal in Bamako. However, these negotiations failed to break the impasse, since Keïta and Cissé refused to follow the recommendations of ECOWAS, which included the resignation of 31 parliamentarians elected in March 2020.  These elections were deemed illegitimate, as only 7.5% of Malians voted, due to COVID-19 restrictions and the ongoing violence against some voting stations. Furthermore, on August 24th, the newly established military junta proposed a three year transition led by a military officer to the ECOWAS delegation, resulting in a political charter rejected by the M5-RFP. In the charter, ECOWAS called for the junta to name a President and a Prime Minister by September 15th, which is the main demand from the M5-RFP.

It has been popularly received, as it comes amid a sustained period of anti-regime, popular protest ?

There are several reasons that explain why the Malians were upset with Keïta’s government. First, the controversial legislative elections that took place in March were characterized by low participation, COVID-19 regulations and insecurity in some voting centers in the north of Mali as well as the kidnapping of opposition leader Soumalia Cissé by jihadists. In addition, Mali’s Constitutional Court invalidated 31 parliamentary seats, resulting in Keïta gaining ten more seats, thus, giving him a parliamentary majority.

Second, as the protests continued, in mid-June security forces shot and killed 11 protesters, which fueled more anger in the protest movement.

Third, Mali has an unstable security situation. Since the 2012 Coup that overthrew President Amadou Touré, Islamist groups with some ties to Al-Qaeda attempted to fill the vacuum of power in the northern part of Mali, to the extend of seizing control in the city of Timbuktu. It is important to state that these islamist rebels used to fight for Muammar al-Qaddafi in Libya in 2011, meaning that they were heavily armed when the Arab Spring broke out and they were forced to return to Mali. Even though the French military has intervened to help the Malian military to diminish the insurgencies’ control, the groups still terrorize Malians in the countryside and the violence has extended beyond Mali’s borders to Burkina Faso and Niger. As a result,  more than 100 Malian soldiers have been killed in 2020 even with the help of the French military and the UN’s blue helmets. Additionally, the vacuum of power has resulted in rising disputes between ethnic groups, leaving more than 500 civilians killed by August 2020.

Four, as a result of the unstable security in Mali and the country’s history with French destabilization efforts since their independence, the military sector in Mali is huge. To illustrate, Mali represents 1.9% of the sub-Saharan African population, yet it accounts for 4.9% of defense spending in the region in 2019. In addition, during the past decade, the military spending has doubled, meaning that 21% of the income is destined for the military sector. Therefore, Keïta relied on the army’s loyalty as the main means to maintain his authority. However, Keïta left some of the troops in the north, those that are in an ongoing conflict against islamic rebels, hungry and unpaid due to corrupt diversion of wages. Also, there has been some questionable spending in the military sector, such as the purchase of a $40 million presidential jet in april, meaning it was acquired in the middle of the COVID-19 pandemic. Thus, the Malians are upset due to the over-spending of the government in the military while there are other sectors, especially the healthcare sector in the context of the  COVID-19 pandemic, that do not have enough resources to function properly, which reflects the regime’s poor governance.

The protests are led by an Islamic imam, Mahmoud Dicko, whose own political ambitions remain unclear?

Mahmoud Dicko is a crucial figure in the coup that struck Mali in 2020 as he is perceived as the spiritual leader of the protest and of the June 5 movement of which he isn’t even a member. Dicko was born in Timbuktu in 1954, and was educated in Mauritania and, later,  at the University of Medina in Saudi Arabia. He identifies himself with the Sunni branch of Islam, acts as an imam to the community, but still emphasizes the importance of Malian culture prior to Islam’s arrival in the country. In the 1980’s he was secretary general of the Malian Association for the Unity and Progress of Islam but left and in the 1990s with Mali’s democratization. He was an active speaker in favor of the transition, and explained how, from the religious perspective, it was important for Mali to achieve democracy.

In 2008 he became the head of the High Islamic Council of Mali, a position that he would retain until 2019. In 2009 he campaigned against reforms that would benefit women and homosexuals in Mali, which revealed the extent of his conservatism. In 2012, Dicko negotiated with various jihadist groups. Among them, he mediated between the leader of the Ansar Dine group, Iyad Ag Ghaly. Although it was not a successful attempt, it depicted Dicko as a pacifist, who was genuinely trying to stop armed conflict in the country.

Later, in 2013, he would promote the presidency of Ibrahim Boubacar Keïta, who promised to seize the rebellion that was starting in northern Mali in 2008. However, and due to Keita’s poor handling of the Jihadist rebellions, the persistent corruption scandals that plagued his administration, and the worsening economic crisis, Dicko parted ways with the president in 2018. In 2019, Dicko led demonstrations against the prime minister Soumeylou Boubeye Maiga, which eventually forced the latter to resign.

Now in 2020, with Mali being controlled by the military council, people are questioning if Dicko is going to rise as a populist leader to fulfill the power void left by Keita.

As a brief analysis of this enigmatic yet important figure, in the current context, Dicko can embody- in a Laclauian way- an empty signifier to the Mailian population that is searching for a new representation of their necessities. This unification of interest can result in  consensus on a conversion point to fulfill the power void left by the Coup

However, Dicko continues to reject the notion that he seeks a formal political office. He claims to prefer working as an imam, and a spiritual guide.

Critics of Dicko believe the Malian imam could prove to be dangerous and perhaps grow to become a “Malian Khomeini”. Others think that whatever Dicko’s political ambitions are, he steps into power or desist, or someone else assumes the responsibility to administer Mali, the structural problems confronting the country will not be resolved solely by a change in political leadership.

Lebovich, A. (2020, July 22). Unchecked escalation: Why Mali is in turmoil. ECFR. https://www.ecfr.eu/article/commentary_unchecked_escalation_why_mali_is_in_turmoil

Smith, A. D. (2017, May 31). Mali flies into international storm over purchase of $40m presidential jet. The Guardian. https://www.theguardian.com/global-development/poverty-matters/2014/may/16/mali-president-boubacar-keita-private-plane-international-aid-donors

Why was Mali hit with another Coup? (2020, August 20). Washington Post. https://www.washingtonpost.com/gdpr-consent/?next_url=https%3a%2f%2fwww.washingtonpost.com%2fpolitics%2f2020%2f08%2f20%2fwhy-was-mali-hit-with-another-coup%2f%3ffbclid%3dIwAR2-Eui9VWLomVyPY8I8YdStIY5GEiu1j4HNq_jPCwbspvobQ6Nn1BcjSsg&fbclid=IwAR2-Eui9VWLomVyPY8I8YdStIY5GEiu1j4HNq_jPCwbspvobQ6Nn1BcjSsg